Down south in Andalucia, you’ll often  notice an arab flair to the food you’ll eat. Adding nuts and fruit gives some dishes a flavorful touch that results in a lighter and sometimes citrusy  meal. Such is the case of a fantastic swordfish  I had in Sevilla where tapas are plentiful and cheap; much cheaper than  anywhere else in  Spain.

Pez espada (swordfish) has been a part of Spanish cuisine for centuries. A meaty and somewhat oily fish that is usually grilled  but  at Casa Paco in Sevilla it’s  sautéed  and then simmered in orange wine, a white wine that has been infused with orange rind.  Of course, the oranges used are the famous Seville ones known for their bitter taste which are commonly used to make marmalade and wine. To give their pez espada al vino de naranja  an even more Andalusian touch, they add chopped dates and pine nuts, thus  incorporating different textures  to create  a great combination of perfectly moist fish with some crunch and  a sweet and sour taste. All for only  €3.50! 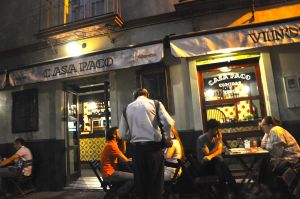