Right outside the city center, in the district of Alcantara hides a small eatery with some of the most traditional fare in town. Toscana, a quaint and small space, crowded with tables in every nook possible, serves an assortment of eighteen types of fresh fish and  various cuts of meat. You can pick the fish you want to eat and they’ll grill it right in front of you.

A big hit among those who worship anything char-grilled, Toscana has been whetting local’s appetites for over thirty years. It was originally owned by brothers Emídio and Carlos Pereira who ran the restaurant for over thirty years until  they sold it  to present owner Vitor Franco, who  also  has ensured that both tradition and standards remain, making it a favorite among many famous musicians, actors and  politicians.

No matter who’s been in charge, it has continuously been a labor of dedication that is clearly reflected in its wonderful food, impeccable service and inviting ambience. As you walk in, a warm welcome from the friendly and attentive staff will make you feel at ease. The menu is rather simple and most dishes are served with  the usual side of salad, rice or french fries. But make no mistake, for the main offerings are anything but ordinary.

I picked the bacalhau á Toscana which was in order for cod is the most popular fish choice in Portugal and my absolute favorite. A nice portion of chargrilled cod and small potatoes drizzled with garlic and warm olive oil, a unique experience for those who can appreciate the mild flavor of this fish and its divine simplicity. Other great choices  were sole, swordfish and bass. As for the meats, there were various  sausages and several cuts of beef and pork like the  secreto de porco preto,  made with acorn-fed Iberian pig,  famous for its tenderness and rich flavor. Another great hit were the lulas á mordomo, tender squid grilled to perfection served with potatoes.  Again, another simple but delicious dish. 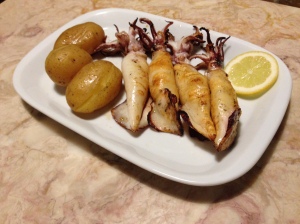 As far as wines go, Toscana’s house one is served in jugs, both red and white, from two barrels placed on the wall. Portugal, a country of great vines, never fails to please no matter how simple the restaurant and  this one couldn’t be any different. House wine, whenever ordered is usually pretty good and  Toscana’s was outstanding!